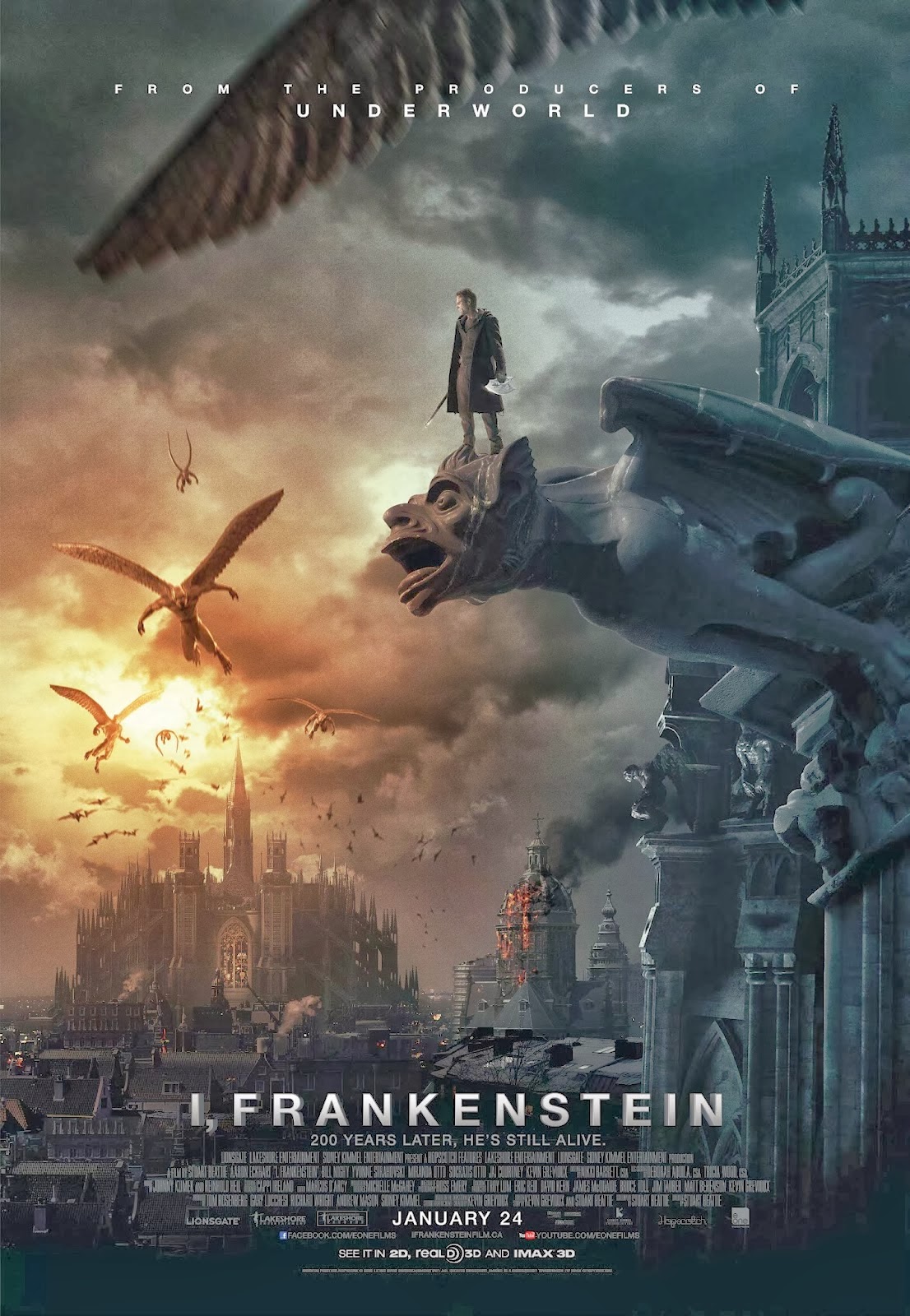 If there is an afterlife, and its residents possess free reign to watch over the living, dearly departed author Mary Shelley must have been screaming bloody murder for her name to be removed from the credits of I, Frankenstein. For here we have one of the dourest, dumbest examples of imagination-deficient cinematic sludge in quite some time; a mopey fan-wank sequel to the literary classic in which the misunderstood, but dreaded, monster emerges - after centuries in miserable exile - as a sexy demon-battering vigilante with the disposition of an emo rocker. Sure, it’s feasible that decent B-movie fun could be generated from a hacky premise that requires our jigsaw puzzle-pieced antihero to mumble “descend in pain, demon!” while surrounded by bad CG fire swirls, but this motion picture IQ dropper is as incompetent as Igor on ice-skates. Blindfolded. 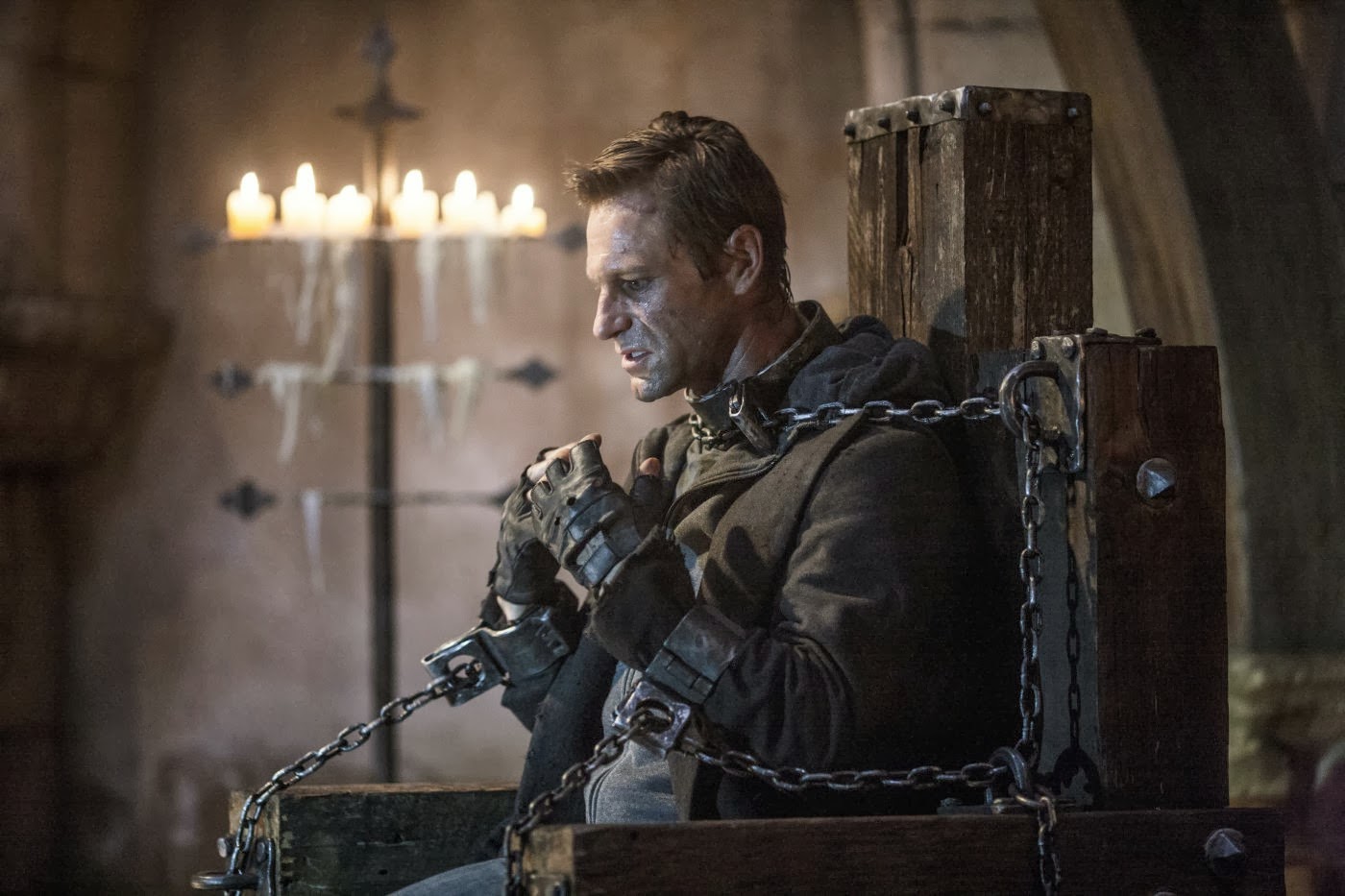 Set in the murky, desolate Gothic streets of a crumbling, unnamed four-block metropolis, the continuing adventures of the famed abomination, now played by Aaron Eckhart, pick up with him becoming embroiled in the centuries-old war between the divine Gargoyles and the sinister demons. Seems the evil forces, led by seething big daddy bad-guy Naberius (Bill Nighy), are hoping to attain Dr. Frankenstein’s miraculous scientific formulas and use them for their own nefarious ends. In a bid to thwart this apocalyptic plot, Gargoyle Queen Leonore (Miranda Otto) offers the newly rechristened Adam steel baton weapons and a cause to fight for, despite the objections of her hot-headed second-in-command, Gideon (Jai Courtney). Of course, ever the loner, the zipper-stitch-faced ass-kicker instead strikes out on his own, recruiting the aid of hottie scientist Yvonne Strahovski in a quest to uncover both the truth behind his mortality and a means of stopping Naberius’s mankind-decimating master plan.

Ostensibly based on co-star/co-writer Kevin Grevioux’s Darkstorm Studios graphic novel of the same name – which, to the best of my research, does not actually exist in any published form – I, Frankenstein is, more accurately, a craven attempt by producers Gary Lucchesi, Tom Rosenberg and Richard S. Write to replicate the success of their cruddy-yet-popular Underworld franchise. Again we have two long-opposing factions of phony-looking supernatural beasts, a tormented protagonist trapped in the middle of the conflict, and Nighy as the acidic villain (it’s debatable whether the actor is even aware he’s playing a different character here). However, whereas that franchise occasionally managed – in its first two installments – to just barely scrape by on the energetic bargain basement vision of Len Wiseman, this project’s helmer, Stuart Beattie (co-scribe of G.I. Joe: The Rise of Cobra, 30 Days of Night and Pirates of the Caribbean: The Curse of the Black Pearl) is a barely adequate point-and-shoot kinda guy. His doom ‘n gloom visuals aren’t egregiously terrible, so much as utterly and completely generic and uninspired. More The Crow: City of Angels than The Crow, if you will. 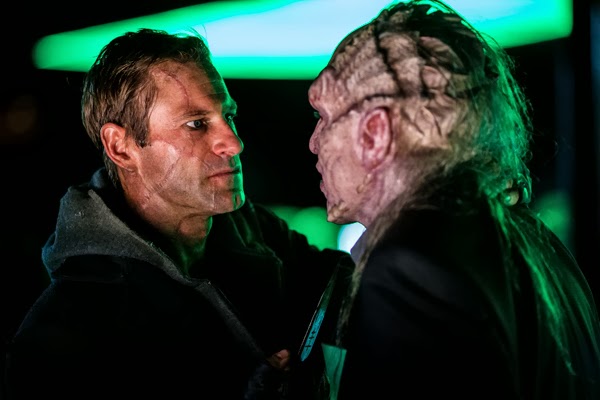 Where the shoddiness really shines through is in the construction. We can look past the distractingly empty sets – I, Frankenstein’s extras budget must have been roughly on par with that of a 1987 episode of "The Bold and the Beautiful" – and joyless videogame-like action in which everything and nothing happens simultaneously. What can’t be forgiven, though, is the jarring, ramshackle editing that randomly transports Adam wherever he needs to be at all times – marvel as he falls off a building onto a subterranean train, sits and reads a book, and then astonishingly appears back on top of the previously mentioned building at a key moment mere minutes later – and loosely staples the directionless shambles of a story together. There’s no flow or arcs, only perfunctory plot beats tossed sluggishly into a swirling chaos of monotonous mythological nonsense and sub-Blade fisticuffs. The stakes feel pitifully low, and, since writers Beattie and Grevioux fail to gift even a single character with a personality trait, it’s impossible to give a rat’s ass what the dickens is going on.

Honestly, you just wind up feeling bad for the actors. Did the elegant Miranda Otto spend much time reminiscing about her career-launching stint in Middle Earth during this sorry shoot? Was Jai Courtney, fresh off the sting of A Good Day to Die Hard, aware that his near future wasn’t going to get any brighter? Did Bill Nighy buy a nice boat with his paycheck? And how about Aaron Eckhart, who was so fantastic in films like In the Company of Men, Thank You for Smoking and The Dark Knight? Clad in a black hoodie, eyes smeared with mascara, the actor glumly continues the frankly embarrassing trend of dressing middle-aged manly men like 18-year-old Goth brats. Remember the days when kids aspired to grow up to look like their favorite movie stars and not the other way around? Yeesh. What would Bogie or the Duke say?! 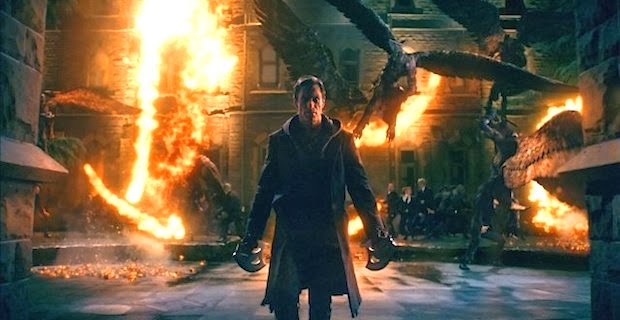 Dreary, derivative and insultingly lazy, the only faint benefit of this vile January dump is that it may potentially point a viewer or two in the direction of Shelley’s haunting work or some of the character’s iconic Universal efforts (allow me a precious glimmer of hope. Please.) Beyond that…well, to waste any more thought on this grim chore would be to exceed the consideration that went into its unholy conception. A stinking, unresponsive corpse of a movie that no one involved could be bothered jolting to life, I, Frankenstein deserves to be kicked into an unmarked grave and unceremoniously buried.