Despite years spent devolving into parody, there was always a sliver of hope that, given strong material, Michael Bay was capable of proving himself more than just a shallow exploiter of explosions. Alas, that optimism dies hard with Pain and Gain, a stupid, unpleasant and tedious patchwork consisting of all the director’s most mean-spirited and gaudy fixations, including rampant misogyny and homophobia, toilet humor and distastefully-portrayed violence, blown up to hideous new heights. And the worst part? The potential was here for something genuinely clever and cool! All it needed was competent hands to guide it.

Inspired by a real-life Florida case, Pain and Gain stars Mark Wahlberg as Miami Beach local Daniel Lugo, a sociopathic personal trainer who sees his ripped physique as an embodiment of the American dream and yearns for more. After attending a seminar by an infomercial huckster, Lugo is transformed into a “doer,” and recruits two of his gym buddies – ex-con Jesus freak Paul (Dwayne Johnson) and sexually dysfunctional steroid case Adrian (Anthony Mackie) – to bilk crooked entrepreneur Tony Shalhoub out of his millions. Kidnapping and torturing him, the trio experience short-term success, but it isn’t long before ugly unexpected complications rear their unwanted heads. 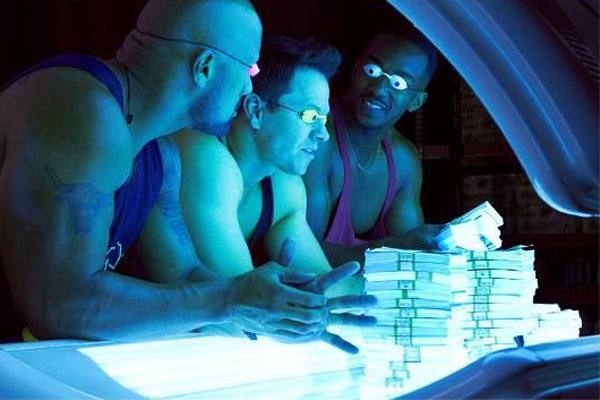 The strangeness of this story is undeniably intriguing; however Bay – working from a script by Christopher Markus and Stephen McFeely (Captain America) – cuts the film’s legs out almost immediately by blowing its main “based on true events” conceit. There’s no believable reality in Pain and Gain; it’s a garish world populated by grotesque caricatures, where busty, slutted-up Maxim models constantly linger in the background and everything glistens with artificial music video sheen. With Fargo – the director’s oft-mentioned influence – the Coen brothers slyly inserted the “true story” tag as a dry joke to convince the viewer the not-totally-unbelievable insanity actually transpired. Here – where that promise is actually authentic! – the helmer fumbles the gimmick by creating a effort that doesn’t support it.

This tonal miscalculation wouldn’t be so bothersome if the movie entertained. Yet it doesn’t. Great black comedy requires a light touch and sophisticated edge the director doesn’t grasp. Pain and Gain is lumbering and meandering (it runs over two hours), effectively killing all comic momentum. The humor rarely transcends the Bay standard – an explosive diarrhea sight gag got the biggest laugh at my screening – and nets more misses than hits. Unlike Spring Breakers, which weaved a similar tale while skillfully ridiculing its heroes, this film’s stabs at incisive self-awareness are undercut by its dumb sledgehammer obviousness and obnoxious crassness.

The actors (futilely) do their best to right the capsizing ship. Wahlberg has actually rarely been better – there’s definitely some Diggler DNA in Lugo – and him, Johnson and Mackie make a decent touched-in-the-head team. Chasing them, Shalhoub is hyper-sleaze personified and a terse Ed Harris, as a P.I., is the only character who seems human. In a fairly thankless role, Rebel Wilson is funny and oddly sweet as Mackie’s lusty nurse girlfriend.

It’s sad to see so much visibly-engaged talent wasted on a misguided passion project this mind-numbing. Collapsing under the crushing weight of its own botched crazy ambitions, Pain and Gain leaves only a weird, visually dynamic shell devoid of emotion, tension or depth. And again we’re left wondering if Bay, an obviously gifted stylist, will ever conjure up a picture that brings as much brain to the table as brawn. On the evidence of this effort, it’s probably wise not to hold our collective breaths.