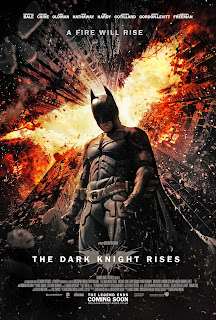 As the saying goes, all wonderful journeys must inevitably come to an end. Christopher Nolan’s The Dark Knight Rises, the rousing final chapter in his Batman trilogy, which began with 2005’s Batman Begins and spectacularly continued in 2008’s The Dark Knight, is a propulsive ten tonne juggernaut of a motion picture; slightly lumbering out of the gate but ultimately smashing across the finish line in unforgettably grand, applause-worthy style.

Those worried that Christian Bale’s last cinematic undertaking as the tormented caped crusader would underwhelm can rest easy. The always reliable Brit helmer, an undisputed master of slickly cerebral cinematic cool, boldly torpedoes the superhero threequel curse, delivering a dense, emotionally resonant comic book epic that captures the imagination like that page-turner graphic novel you just can’t for the life of you put down. 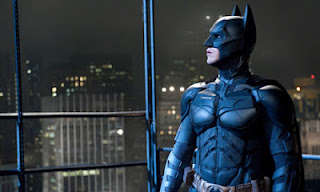 Returning to the streets of Gotham City eight years after the Joker’s mad rampage, The Dark Knight Rises sees Bruce Wayne (Bale) at an all-time low; unkempt, injured and isolated, he’s a purposeless shell of his former self, watching from the shadows as his proud metropolis celebrates another year of relative peace. The Dent Act, named after the tragically deceased Two-Face-d D.A., has provided authorities with a means of successfully thwarting internal corruption and organized crime, essentially putting the Bat out of business. However, while all seems well, a storm is brewing that threatens to expose the well-intentioned lie concocted by the haunted hero and long-suffering GPD Commissioner Jim Gordon (Gary Oldman, a dignified portrait of world-weariness).

Enter Bane. As inhabited by the brutishly imposing Tom Hardy, he’s a vicious, facial apparatus-sporting revolutionary who charges into Gotham with the supposed intention of taking down the wealthy elite in order to give the city back to “the people.” Of course, true to villainous form, there’s far more to Bane’s plan than just empowering the 99%. His feverish dream is to destroy Wayne body, mind and soul. As the billionaire playboy vigilante struggles to get back into fighting shape to tackle the maniacal mountain of a man, much to the consternation of loyal butler Alfred (Michael Caine, dependably heartfelt), he draws the attention of John Blake (Joseph Gordon Levitt), a strong-willed beat cop with a similar history. He also finds himself caught between two wildly disparate romantic interests: environmentally conscious woman of means Miranda Tate (Marion Cotillard) and periphery-dwelling jewel thief Selina Kyle (Anne Hathaway). These distractions prove fleeting, though, once Bane slowly begins stripping away all that Wayne holds dear, forcing the erstwhile masked protector to look inwards and rediscover what it truly takes to become the Batman. 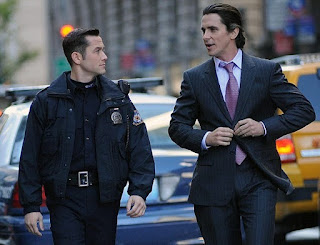 Embracing the Star Wars trilogy playbook, The Dark Knight Rises often echoes Return of the Jedi, re-visiting many of the same narrative elements from the series’s first entry, only across a bigger, more extravagant (IMAX-sized) canvas. This is a massive, plot-heavy film that, in its first hour, tends to operate under a “function over form” philosophy, employing heavy exposition and backstory as a means of pushing all of the pieces into place for the dazzling two hours to come. Although these sections often feel a little bumpy and confusing – side characters, such as Ben Mendelsohn’s snivelling industrialist baddie, come across more like devices than flesh and blood individuals – the talented director does an effective job establishing the escalating sense of doom and gloom that hovers over the majority of the movie. This is not a light-hearted adventure, and Nolan trusts the audience to follow him into the darkest regions of Bane-occupied Gotham which, following a series of breathtaking attacks, becomes a terrorist state that reflects our most paranoid, horror-drenched post-9/11 fears.

Despite the grim atmosphere, Nolan can deliver high octane geeky thrills with the best of ‘em. An opening plane hijack sequence is deliriously analogue in its staging – eschewing heavy CG in favour of stuntmen and daredevil practical work akin to the best Bond installments – as are scenes involving the beloved Batpod (which pulls off some killer hair pin turns). And just wait until you see the Bat, our hero’s tank-sized flying battle station! The film’s climactic half hour is a veritable orchestra of seamless virtuoso action that puts most city-demolishing blockbuster finales to shame. 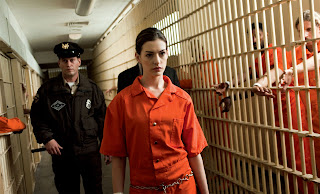 The script, by Nolan and his brother Jonathan, with story input from David S. Goyer (Blade, Ghost Rider: Spirit of Vengeance), like its predecessors, does a fantastic job balancing the humanity, intentionally murky hot button political commentary (which will fuel no shortage of debate for years to come on Nolan’s social conscience and perspective on the Occupy movement and the U.S.’s war on terrorism) and go-for-broke action. The occasionally labyrinthine narrative, an oft-inspired amalgamation of vaunted comic-book tales “Knightfall,” “No Man’s Land” and Frank Miller’s seminal “The Dark Knight Returns,” is both intensely compelling and thematically intriguing, weaving in fascinating meditations on redemption, the motivational influence of hope amidst despair, the power of the individual, and the enduring legacy of symbols. It invests us so strongly in its immersive world, and in Wayne’s trials and tribulations, that its skillfully paced 3-hour run-time zips by at a bracing clip. This is very much a third act, making precious few concessions for newcomers – those who haven’t seen Batman Begins will likely be a bit lost – while simultaneously paying off fan expectations and boasting several unanticipated revelations. By the time the curtain triumphantly falls rises, there’s an unusual – given Hollywood’s franchise-milking mentality – sense of genuine completion.

This is arguably Bale’s best turn in the cape and cowl; the extra years and baggage suit him, and imbue the character with a junkie-ish desperation. Wayne, in his current mental state, is nothing without the costume, and armouring up feeds his addiction. At least until his first encounter with Bane, which allows the actor to rebuild his entire Batman persona and close out his take on the crusader with a bang. Supporting him, Hathaway is as ideal an on-screen Catwoman as we’ve seen. Seductive, dynamic and dangerous, she’s a dead ringer for the comic book anti-heroine and nails Kyle’s ability to adapt on a dime, whether theatrically transforming into a hysterical victim or a Bambi-eyed innocent. Levitt excels in a tricky role, portraying an unpredictably complex character that, on the surface, seems like a throwaway. 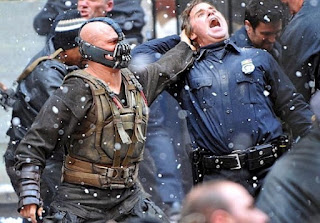 Tom Hardy had his work set out for him. Tasked with following up Heath Ledger’s iconic, Oscar-winning Clown Prince of Crime, the actor was saddled with a bulky S&M mask that leaves only his eyes visible, and cast as a B-level antagonist who is, frankly, not one of the Dark Knight’s more multi-dimensional rogues. Nonetheless, against these burdensome restrictions, Hardy has created a truly unique emodiment of evil. A rhetoric-spouting, military gear-clad battering ram – he’s more than a match for Batman in hand-to-hand combat – Bane just so happens to be an amusing study in contrasts as well. Thanks to his ever-present demonic headgear, he is, like the masses he aims to provoke, faceless, yet his creepy, mechanical cartoon walrus voice sounds too posh and polished to hail from lower-class origins. For all he may lack the Joker’s rock star charisma, he’s an undeniably hypnotic, unsettling and refreshingly unconventional presence.


It’s doubtful any sequel could have ever matched the hype and artistic alchemy of The Dark Knight, but where Nolan’s new film falters, it more than compensates with jaw-dropping sights, sounds (Hans Zimmer’s pounding, vital score is a crucial co-star) and crowd-pleasing showmanship. A dramatic close to the first great superhero trilogy, this is a tremendous achievement in big-screen myth-making that’s as poignant as it is utterly entrancing. If the Batman must soar into the ominous Gotham sunset, The Dark Knight Rises is a stunning and victorious exit.