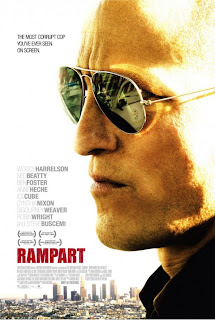 There’s an unmistakeable glint of deceitfulness in Woody Harrelson’s piercing blue eyes, like he knows he’s getting away with something. They stand in sharp contrast to his honest, gentlemanly Southern-fried accent and give him the air of a born con artist; a good-natured dim bulb who is, in reality, ten steps ahead of everyone else, gleefully working out new angles in his crafty mind. It’s a quality that has served him very well over the course of his intriguing and varied career, both in comedy (Zombieland, Kingpin) and drama (The People Vs. Larry Flynt, No Country for Old Men), and is given an interesting twist in Rampart, an uneven bad-cop-gone-worse character piece that takes the Harrelson archetype to its most extreme, hard-edged conclusion.

When we first meet Harrelson’s crooked, late 90s-era LAPD officer David Brown, he’s holding court with a pair of co-workers in a parking lot, dropping racist slurs and intensely brow-beating a nervous female recruit into consuming a carton of french fries. And this is a mere glimmer of his ugliness. Gaunt and bug-eyed, he hides behind a pair of large aviator sunglasses, rarely, if ever, bothering to eat anything. Instead, Brown subsists on an endless diet of cigarettes and booze, as well as the steady string of wounded, lonely women he picks up at his pathetic local watering hole. When he does go home, it’s to a dingy basement suite in the house of his ex-wife (Cynthia Nixon). He fathered one daughter with her and another with her sister (Anne Heche), who conveniently lives right next door. Neither of these women has any patience left for his manipulative antics. 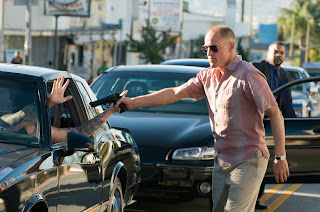 If his personal life is in shambles, his professional one is an unmitigated disaster. Prejudiced and prone to reckless behaviour, the brutal officer has come under intense scrutiny for beating a latino driver nearly to death following an automobile collision. This isn’t the first time he’s landed in hot water; he earned the dubious nickname “Date Rape” for once allegedly murdering a purported sex offender. Now, a persistent assistant D.A. (Sigourney Weaver) and a resourceful Internal Affairs investigator (Ice Cube) – motivated to clean up the department in the wake of the infamous Rampart scandal a couple years earlier – have his number, and pose a serious threat to his already dismal, crumbling world. For Brown there’s nowhere really left to go but down.

Rampart marks the second collaboration between Harrelson and sophomore director Oren Moverman. Their first, 2009’s poignant military drama The Messenger – which also starred Ben Foster, who produced this film and has a bizarre bit part as a wheelchair-bound homeless man – netted the actor an Oscar nomination. Given a better release date, this one might have too. The helmer again coaxes a fantastic performance out of his star; not as outrageously showy as the crazed turns by Nicolas Cage or Harvey Keitel in the thematically comparable Bad Lieutenant pictures, yet no less concentrated, daring and lived-in. David Brown is a true original in a genre that has spawned no shortage of carbon copy villainous coppers, a revolting, detestable lost soul that we can’t break our gaze from. A bleak joke of a character, he’s an ego-maniac of limited capabilities with no link to the rest of humanity, fighting like a mad dog to remain mired in a toxic status quo that mirrors his own sick, self-hating psyche. 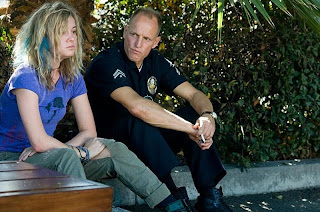 Harrelson’s off-kilter protagonist is such an ugly force of nature that his presence goes a long way towards helping the film battle the limitations of its often patchy screenplay. Written by Moverman and James Ellroy, the crime novelist/scribe behind L.A. Confidential, The Black Dahlia and this effort’s underrated forebear Dark Blue, Rampart focuses almost solely on its lead, at the frustrating expense of those around him. There are a lot of characters here – too many, actually – and the majority are robbed of dimension. Robin Wright, as a public defender who acts as Brown’s chief romantic conquest, admirably taps into her role’s tired fragility, however there’s no momentum to their relationship and her story is unceremoniously cut short. Suffering a similar fate are Weaver, Cube, Foster and Ned Beatty – as a shady retired cop with questionable connections – who show up and give their all without every quite making a significant impact. Only Brie Larson, as Brown’s resentful lesbian daughter, is given an arc that resonates. What made The Messenger so effective was its powerful intimacy. Rampart, on the other hand, is spread over a larger, more densely populated canvas that grows muddled and confusing, preventing us from emotionally investing ourselves in its sordid universe.
Still, in spite of the meandering narrative, Moverman delivers a handful of brilliantly conceived moments. One of the best occurs when Brown, taxed and angry, wanders into an underground sex club seeking release and finds it in the unlikeliest of places. Bearing an unmistakeable resemblance to one of Shame’s most haunting sections, the scene is a terrifically queasy mishmash of disturbing, bleary-eyed imagery, quick-cut editing and pounding distorted audio. Also memorable is a devastating hotel room meeting between Brown and his two daughters, in which the girls attempt to break ties from their drunken, washed up father while he tries desperately to lure them back with painfully transparent displays of affection. 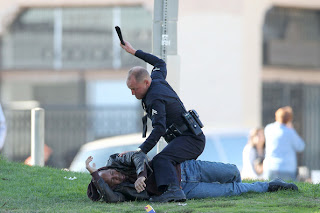 If only the picture’s bursts of greatness didn’t feel so much like welcome oases adrift in a sea of lukewarm cop movie clutter. It’s a film that bears all the crucial pieces and people necessary to fashion a gritty classic neo-noir, so it’s hard not to be disappointed when it wanders off down dead ends and falls short of achieving its full potential. Rampart may be a fiery showcase for Harrelson’s fearlessness, but as a cohesive case study in police corruption it misses just as many marks as it ultimately hits.

2.5 out of 5
*Originally published at Converge Magazine.
Posted by Cam Smith at 11:33 PM