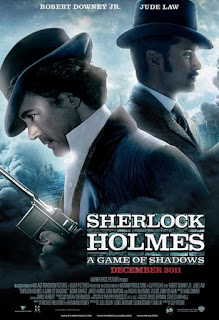 2009’s surprise smash Sherlock Holmes, which reinvented Sir Arthur Conan Doyle’s master detective into a hyper-aware bundle of anti-social neuroses and peculiarities, was a decent enough film hobbled by a number of problems. Director Guy Ritchie was saddled with a script heavy on exposition and world-building, but light on actual mystery and depth. While Robert Downey Jr. and Jude Law, as Holmes and Watson, infectiously batted their roles out of the park, the picture separated them – to great detriment - for too much screen-time. It also failed to supply a memorably dastardly villain or a lively love interest.

My hopes were high that, with its gorgeously ugly steampunk Victorian London universe up-and-running, and the key figures firmly ingrained in the public consciousness, Ritchie would use his sequel to actually spin a ripping yarn worth telling. Alas, Sherlock Holmes: A Game of Shadows is an obnoxious, confusing slog of a motion picture; one that mistakes bombastic franticness for charm, revels in tiresome snarky smugness, and criminally wastes one of literature’s most indelible bad guys. It’s a prime example of lazy franchise filmmaking; taking what everyone loved the first time around and cranking the dial mercilessly up to 11. 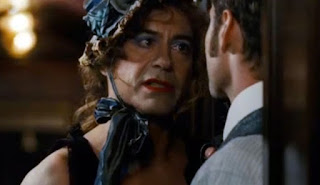 Picking up a few years after the initial entry, the movie opens with Sherlock (now with even more enhanced psychic powers!) on the trail of fiendish mastermind Professor James Moriarty (Jared Harris), a cold, sinister intellectual who may have a hand in a series of anarchic bombings that threaten to kick-start war in Europe. Unfortunately for the crazed detective, his trusty right-hand man, Watson, is about to embark on his honeymoon with the lovely Mary (Kelly Reilly), and firmly resists helping to unravel the truth from the uber-tangled ball of conspiracy theories and misdirection. However, an action-packed visit to a gypsy fortune teller (Noomi Rapace) soon brings an abrupt, explosive halt to Watson’s romantic plans. The delightful deciphering duo are then launched on an extensive cross-country fact-finding mission, where they face unbelievably dangerous cliffhanger predicaments, and, ultimately, find themselves drawn ever closer into Moriarty’s sinister web of deceit and murder.

In theory, the script for a Sherlock Holmes adventure should operate like clockwork, with all of the seemingly disconnected plot threads fusing together into one grand, climactic “A-ha!” moment of glorious revelation. Whereas the 2009 film sort of half-heartedly toyed with that trope, A Game of Shadows’ terrible script, by Michele and Kieran Mulroney, basically abandons the concept all-together! There isn’t a great deal of mystery here at all - only an endless series of convoluted happenings obscuring what is essentially a very, very routine villain scheme. Sure, there’s a last minute reveal, but it’s a shameless cheat. It depends solely on introducing never-foreshadowed elements that the audience has no chance of predicting. The film really wants to play like a Victorian-era Indiana Jones/James Bond adventure, with its characters skipping across locations willy nilly, carried almost solely by a string of dynamic action sequences. Problem is, those series depend on fast-paced, broad-stroke storytelling to succeed. Holmes, on the other hand, is simply at odds with that mode of high-flying adventure because it’s fixated on the minutiae of each moment, exhaustively explaining every new development and detail. Call it Cinematic Square Peg, Round Hole syndrome, if you will. 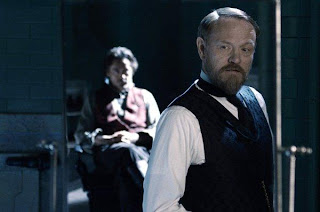 To complicate matters, director Guy Ritchie's stylistic skills have always far outweighed his ability to convey a satisfying narrative. His best efforts – Snatch and Lock, Stock and Two Smoking Barrels – are jolting, showy snapshots of attitude, visual virtuosity and scruffy, street-level cool. Here, though, working with a script that’s as incoherent as the last two Pirates of the Caribbean pictures, he flounders, unable to mould this overlong, shapeless mess into a compelling whole. That said, working with cinematographer Philippe Rousselot and production designer Sarah Greenwood, he has made a fairly striking mediocrity. Victorian England has rarely looked as wonderfully cluttered and ominous (you can practically smell the filthy cobblestone streets and soot-covered extras). And, although his livewire energy seems absent from the majority of the movie, Ritchie does still find a handful of moments to shine, among them an artillery-shell-packed jaunt through the forest, a nifty battle inside the cabin of a steam engine, and an amusingly awkward horse-riding montage - scored, improbably, to Ennio Morricone’s hee-hawing theme from the 1970 Clint Eastwood western Two Mules for Sister Sara.

It bears mentioning that Downey Jr.’s Holmes is beginning to creep perilously close to Jack Sparrow-ville. He’s fun in short bursts, but becomes grating when standing centre stage for too long. In A Game of Shadows he runs wild, consuming everyone in his presence, save Law’s suitably aggravated Watson. This picture desperately needed well-rounded supporting players to add flavour and build the series’ mythology into something nuanced and involving. Steps have been taken, with the addition of Moriarty and Holmes’ spy brother Mycroft (Stephen Fry – a winking, jovial presence in search of a purpose), but these characters aren’t given enough to do. Despite an effective last-act verbal chess match with Holmes, Moriarty never feels like the iconic villain he should be. Harris has a diabolical exactness that’s largely underutilized, and we never really get a good sense of the true malevolence he’s capable of unleashing. As for poor Noomi Rapace – cinema’s fierce original Lisbeth Salander – she’s stuck here in the type of useless, one-dimensional role many gifted imports must slum through on their debut trip across the pond. May her future burn brighter. 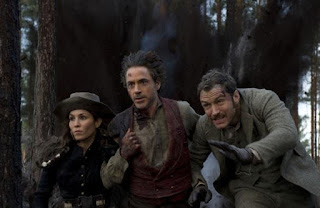 Draggy and nearly devoid of joy or thrills, Sherlock Holmes: A Game of Shadows soullessly vacuums up the accumulated goodwill generated by its predecessor, leaving only an uninspiring promise that a third instalment is definitely in the cards. The fact that the film is helpless to mine good escapist entertainment from such rich, fertile source material is baffling and, to be honest, more than a little concerning. If Ritchie and Warner Bros. really want this franchise to endure, they’d best make it a priority to avoid screenplays this ridiculously clueless.