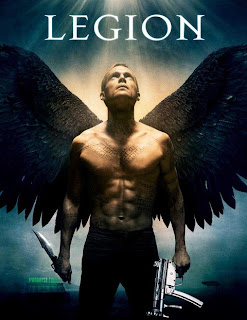 If there is a deeper message to be found within Legion, the sloppy new biblical horror actioner, it’s that God has completely, and perhaps irrevocably, lost his ever-loving marbles. At last fed up with “mankind’s bullshit” (I blame the whole CoCo/Leno fiasco), He’s orchestrated a swift and aggressive master plan which calls for the apocalypse to be brought about by an invading army of unstoppable seraph warriors, led by the mighty Gabriel. However, as opposed to simply allowing his winged soldiers free reign to tear a relentless bloody swath through the heart of humanity, he’s decided - rather questionably, it must be said – to complicate matters by ordering them to inhabit fragile (read: non-bulletproof) mortal bodies and utilize only their sharpened teeth and claws in battle. Uh huh.

Fortunately for all of us unfortunate Earth-dwellers, gutsy ass-kickin’, heat-packin’ archangel Michael (Paul Bettany), realizing that his Holiness is riding the express train to Cuckoo County, makes the valiant decision to abandon his divine flock, hew off his wings for no good reason (It’s the symbolic thing t 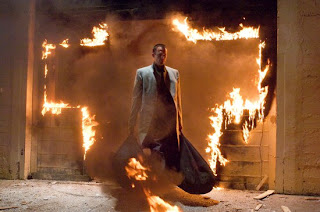 o do, I suppose) and take up arms alongside a small, eccentric band of B-movie stereotypes occupying a dusty diner/gas station in the desolate desert town of, wait for it, Paradise Falls. This motley crew of weary souls consists of the businesses hard-bitten owner Bob (Dennis Quaid), his mopey loser son Jeep (Lucas Black), one-armed fry cook Percy (Charles S. Dutton), pregnant waitress Charlie (Adrianne Palicki), mysterious tough-guy Kyle (Tyrese Gibson) and a rich, snotty couple (Kate Walsh and John Tenney) on the road with their saucy teen daughter Audrey (Willa Holland). Begrudgingly united by the lethal forces banging at the windows, and tasked with ensuring the safe birth and survival of Charlie's unborn child – the prophesied saviour of mankind - Michael and his new flesh-and-blood allies prepare to face down the vindictive fury of the unreasonable Almighty.
As ridiculous as it reads on paper, there’s something undeniably charming about Legion’s corny Old Testament doom-mongering that I wish writer/ 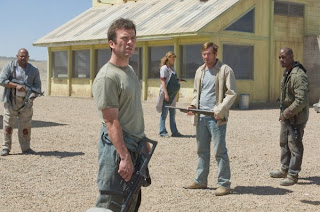 director Scott Stewart had been less hesitant to run amok with. Sure, we get fleeting glimpses of wickedly amusing gross-out camp in the film’s early first half, in weirdo encounters with a foul-mouthed, spider-walking senior citizen and an elastic-limbed ice-cream man, but the novice helmer never embraces the devil-may-care rebelliousness that this material requires to make an impact. Rather, there’s an oppressive earnestness that drags the picture down, disregarding cheap thrills and attitude in favour of never-ending scenes depicting glum characters spouting insipid Dr. Phil-isms to each-other regarding, among other things, being true to oneself, learning to trust others, and breaking free from the burden of past mistakes.
Had Stewart been working with smart or inventive cinematic elements, I’d be willing to abide his propensity for self-importance, but the film is a blatant mishmash of ripped off plot-points and ideas without a clear identity of its own. In fact, one could make a hell of a drinking game out 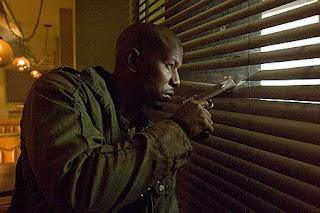 of spotting the endless references and “borrowed” scenes (I myself jotted down The Terminator, I Am Legend, Night of the Living Dead, Evil Dead, Jeepers Creepers and Assault on Precinct 13), though it would probably induce unconsciousness well before the end credits. While ham-fisted homages can be great fun in enjoyable trash (2008’s Doomsday is a superior example), Legion’s lack of identity plays havoc with the movie’s narrative flow, leading to an often distractingly inconsistent tone and badly tacked-on third act that feels desperate, cluttered and maddeningly rushed.
Thank high heavens, then, for Paul Bettany, whose stoically commanding performance as Michael is the film’s lone saving grace. The criminally underrated actor has a firm grasp on playing characters grappling with religious inner-conflict (witness his albino assassin from The Da Vinci Code or his portrayal of Charles Darwin in Cre

ation), and he instils his archangel hero with almost superhuman gravitas. Exploiting his towering, wiry frame to its full intimidating effect, Bettany never falters in his dedication to grounding the silliness around him, whether blowing fiery crucifix-shaped holes in walls, engaging in sombre philosophical exchanges with Kevin Durand’s misguided Gabriel or using a hand-gun to convert a gas-pump nozzle into a make-shift angel-roasting flame-thrower. Unlike the sea of actors drowning in bad dialogue and false sentiment around him, Bettany delivers an effective and forceful performance markedly better than the lame movie it’s stuck in.
Certainly, wasting Bettany is unforgivable, but Legion’s most egregious sin is that it shamelessly teases us with its nutty “When Angels Attack!”/Slayer concept album premise whi 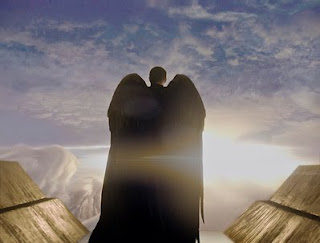 le lacking the goofball conviction to deliver on the infinite guilty-pleasure possibilities. Instead, it’s joyless and pedestrian; an entirely unremarkable, factory-assembled genre entry made for all that will be likely enjoyed by very, very few. It’s a touch ironic that, in making a film about God’s lack of faith in man, the filmmakers reveal a crippling lack of faith in their own audience.
2 out of 5
*Originally printed in SFU's The Peak: Feb. 1st, 2010.
Posted by Cam Smith at 12:18 AM