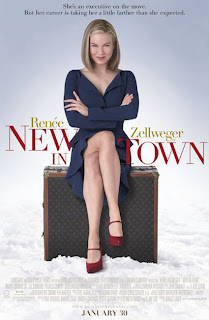 There are few actresses harder to dislike on-screen than Renee Zellweger. With her blond hair, perpetually pursed lips, and innocent doe-eyes with just a hint of mischief, she calls to mind Walt Disney’s classic depiction of Peter Pan’s Tinkerbell. In films as dissimilar as Bridget Jones’s Diary, Nurse Betty and Cold Mountain she’s shown a durable knack for mixing dramatic weight with a spot-on talent for comic timing that puts many of her peers to shame.

So what is she doing in a romantic comedy as exhaustedly formulaic and insipid as New in Town? Really, I 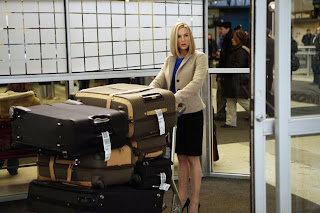 want, no wait, make that DEMAND to know!

Initially set in sunny Miami, Zellweger’s Lucy Hill is a fashionable, business-minded consultant with a love of the fast-life and single-minded dreams for professional success, who tirelessly works for a powerful, faceless corporate entity called Munck Foods. Overshadowed and out-numbered by her male co-workers, Lucy is unanimously nominated to travel to a small Minnesota town (actually Winnipeg according to the film’s credits) and, in preparation for the company’s new line of “Rocketbar” energy bars, oversee the reconfiguration of their local manufacturing plant.

Arriving in the sleepy frozen burg of New Alms, however, Lucy quickly finds her assertive, domineering 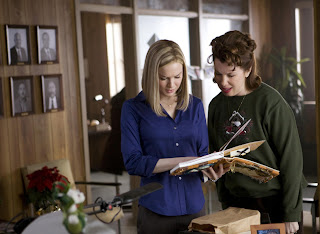 attitude at odds with the jovial, scrapbook-making, tapioca-eating, Jesus-worshipping town residents. Even more troubling is her constant conflicts with the local union leader, a tough but lovable single-father named Ted (played by Harry Connick Jr.). Over time, though, Lucy finds herself warming to her strange new friends (and Ted in particular), but when the new line fails, and the corporation demands the factory be closed, Lucy must decide what is more important: her friends or her work.

By now, you can probably easily connect the dots to figure out the ending, as well as every single possible plot development with the film, and there 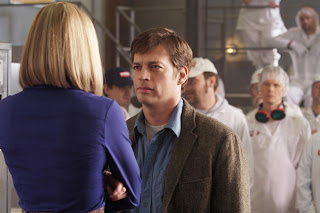 in lays the predicament. It’s as if the filmmakers simply tossed Notting Hill, Mr. Deeds Goes to Town, Welcome To Mooseport, Groundhog Day, You’ve Got Mail, Picture Perfect and Fargo (I’ll get to that part very shortly) in a blender and hit “goo-ify”. In fact, New in Town is so by-the-books predictable that had it been made in the forties or early fifties, and a variant of the blueprint likely was, it would’ve starred Doris Day or Jean Arthur. And still felt stale.

It’s hard to say whether writers Ken Rance or C. Jay Cox were attempting to add a touch of edginess to their floppy script by including blatant references to the Coen Brothers’ Fargo, or whether it was a last minute directorial decision, but either way it stinks. Not content to sim 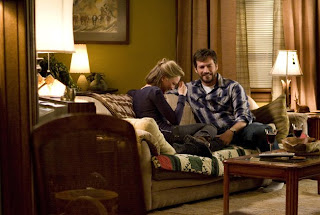 ply give all the characters cartoonish accents and cutesy-pie lines - which often recall Kathy Bates’ character in Misery - the filmmaker’s even cast an irritating Frances McDormand look-alike (Siobhan Fallon Hogan) in a carbon-copy role of McDormand’s Oscar-winning Fargo character. Hell, they even give her the same last name! (Gunderson, for those short of memory) Oy vey!

...And yet these self-conscious attempts to be endearing could be forgiven had the film bothered to come up with a single original idea. Even the romance between Zellweger and Connick Jr. is strangely under-developed and ill-fitting. She seems too prim and intelligent for him, while Connick Jr. just seems to darn weird and off-putting. The actor has a strangely unsettling look in his eyes, like he’d rather be hunting h 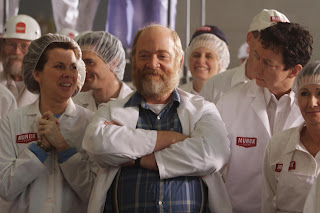 uman beings for sport than romancing this adorably uptight cutie.

So, okay, the romance doesn’t work. But neither does the comedy, which relies on really awkward pratfalls and extended “naughty” comedy bits. Watching Zellweger furiously attempt to find a way to pee through a suffocating snowsuit is painful at best, while a bit featuring, ahem, the effects of cold air on a certain part of the female anatomy has the comic timing of a two-bit narcoleptic stand-up.

Regardless of its countless flaws, it’s hard to truly hate New in Town (although the use of “Walking o 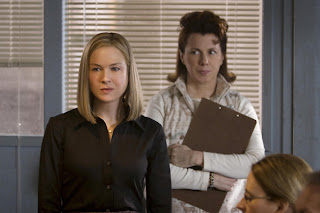 n Sunshine” on the soundtrack pushed me ever closer!) due to the sheer good intentions behind it, and because of Zellweger’s effortless lovability. This is a square, junky, banal effort of minimal ability that will probably still manage to mildly entertain a certain demographic of middle-aged female viewers. But I’d urge that their friends, families and significant others would be significantly well-served in skipping Town.