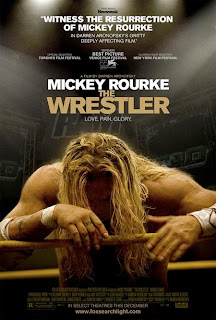 While very few memories of my early childhood still remain present in my increasingly over-taxed frontal lobes, I still hold preciously vivid memories of attending the WWF spectacular at the PNE Coliseum in the now distant year of 1986. Over the course of an enchanting evening, which surely put my mom’s infinite patience to the test, the audience was treated to a litany of unforgettable sights such as Bret “The Hitman” Hart, in his ever-present hot pink tank top, sneering and spitting on a rowdily appreciative crowd, as well as Jake “The Snake” Roberts lugging his trademark python around the ring to mass applause and adoration.

While silly in retrospect, those unforgettable sights over-powered my 6-year-old imagination like a 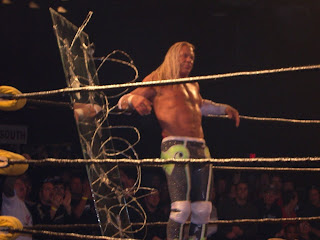 Flux Capacitor on a DeLorean, and as I’ve grown older they’ve remained encapsulated in a hazy golden glow of nostalgia. Yet, watching Darren Aronofsky’s new film The Wrestler, which arrives on a tidal wave of goodwill for newly resurrected comeback kid Mickey Rourke, I found those wistful childhood memories frequently dragged kicking and screaming into the present.
Playing Randy “The Ram” Robinson, a once great superstar in the WWF tradition, who is now a lonely trailer-park denizen with bad knees, a hearing aid and an over-reliance on prescription medication, Rourke disappears und 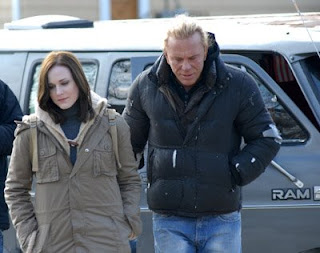 er a cloak of physical and emotional pain. As he travels to beat-up gyms and dingy community centres to perform in violent low-level wrestling matches for cash and perhaps one last chance for glory, Randy’s disappointment and understanding of his rapidly dwindling celebrity is reflected through the battered eyes of Rourke, a once-great talent also very familiar with lost potential.
For all his flaws, injuries and emotional shortcomings however, Randy remains a sadly loving individual who yearns to connect with those around him. Between visits to a scuzzy local strip club, where he pines for a middle-aged pole dancer named Cassidy (Marisa Tomei), he clumsily attempts to repair his broken relationship with his rightfully resentful daughter (Evan Rachel Wood). Captured with near-documentary precision by Aronofsky and cinematographer Maryse Alberti, these relationships and affecting encounters, as well as Randy’s quest for relevance, form the central narrative of The Wrestle 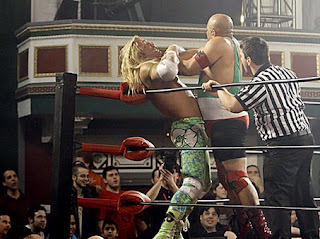 r, a film which eschews typical Hollywood story-telling in favour of in-depth character study and profound emotional truths.
With his long, tacky bleached blonde hair, as well as an imposing stature and craggy features which bring to mind Marvel Comic’s The Thing, it’s amazing how winning Rourke comes across, and how he manages to convey the experience of living within Randy’s skin to the audience. From the exhilaration of standing in front of a crowd of enthusiastic screaming fans, to the humiliation of being forced to work for low wages at a measly deli counter job, there is an uncanny sense of transference at work, washing Randy’s joys and sorrows over us in unstoppable waves. To call the perform 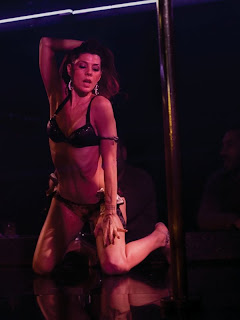 ance a masterwork is to sell it short; Rourke is the pulsating exposed heart of The Wrestler, delivering a performance so steeped in reality that it’s often difficult to separate the creator from the creation.
Rourke’s co-stars prove to be equally up to the daunting challenge of matching his go-for-broke portrayal. Tomei, an actress who seems to be hitting her professional stride in recent years, is a fine counterpart to the commanding star. A mirror reflection of Randy’s own battle to remain viable in a youth-driven field, her stripper character walks a fine line between loving and distant. She recognizes as much good in him as bad, and Tomei’s brave performance allows us to sympathize with her at the same time we crave for a solution to Randy’s crippling loneliness. Similarly Evan Rachel Wood creates an honest and gripping three-dimensional portrait of bare childhood wounds in just a few short but invaluable scenes.
The performances would be for nought though, if it weren’t for Aronofsky’s steady directorial hand, unobtrusively revealing the layers of Randy’s world and allowing his act 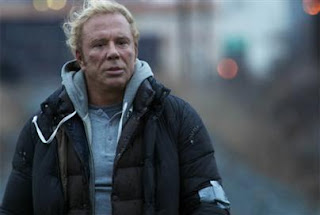 ors supportive free reign over their environment and performances. There isn’t a single clumsy moment or false sentiment in The Wrestler, and Aronofsky’s effortless mastery over the film’s key scenes, such as Randy’s heartbreaking beach-side walk with his daughter or a gruesome extreme wrestling match featuring staple-guns and barb wire, further solidifies him as one of our most important of new directors.
For all of his dreams, virtues and faults, Randy “The Ram” Robinson goes on the short-list of the greatest of modern film characters, an individual who I felt str 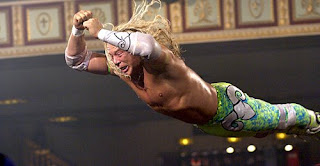 angely richer for having been able to be introduced to. The Wrestler is a stirring exploration of the human spirit, as well as a painful reminder of one of life’s many tragedies: that our heroes, no matter how romanticized or forgotten, are ultimately destined to grow old along with us.
5 out of 5
*Originally printed in SFU's The Peak: Jan. 19th, 2009.
Posted by Cam Smith at 7:14 PM