Will A Resurrected TMNT Bring In The Green? I have returned! I know I promised I'd be back on track in my last post (2 flippin' weeks ago!!!), but I lied. But now I've finished the last of my exams and am here now to jumpstart this old warhorse back into fighting shape. Speaking of restarting something archaic... This April, children of all ages (Actually males aged roughly 22-28) may be stampeding into the local movie house! Why? 'Cuz the Turtles are back, that's why! Yes, as the 80s continues to be recycled to fit into modern mainstream pop-culture, the Teenage Mutant Ninja Turtles are back in the spotlight with a brand-new CG flick titled, appropriately enough, TMNT.

Now, it must be said that I was a HUGE Ninja Turtles fan as a kid. I watched every episode of the original cartoon series dozens upon dozens of times.I had the majority of the action figures (Why couldn't they ever make a de 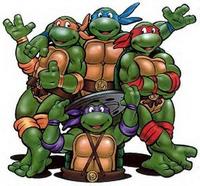 cent looking Shredder?). I bought almost every issue of the Archie brand comic book (Including the epic issue The Teenage Mutant Ninja Turtles Meet Archie). The TMNT video games exposed me to frightening amounts of TV radiation. The milestone, however, was my first viewing of Teenage Mutant Ninja Turtles: The Movie which was nothing less than a powerful religious experience... And that effect was never diluted over the next 100 times I watched it. I was also enthralled by its sequel Secret Of The Ooze, although I wasn't as pleased by the toned down violence...

By 1993, however, Turtle mania was dying for me, as well as the general public. I was one of the few that made the trip to see Teenage Mut ant Ninja Turtles III, and although I was mildly charmed, its cheap production values and hokey humor officially marked my departure point from the franchise.
When the property sprung back up in the 90s, with the atrocious live-action series Teenage Mutant Ninja Turtles: The Next Mutation, it was further proof that the green machine was dead... But then a small rumble started... 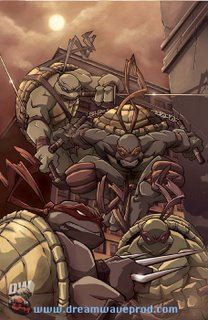 In 2003, another animated series sprung up. It was closer to the tone of the original Eastman & Laird comic books (from which the franchise sprung), and gained a steady fan base. I only saw a couple episodes, but appreciated the fact that TV was keeping the beloved foursome alive. Now, I'm pleased to say, that they are not only quite alive, but looking to worm their way back into our collective hearts. The newest trailer has gone up, and it looks pretty radical.
(Check it here: http://media.movies.ign.com/media/150/150340/vids_1.html).
Now, I'm pretty rusty on my TMNT knowledge. From what I have been able to absorb from other sites, this film picks up after the second live action film (Ho 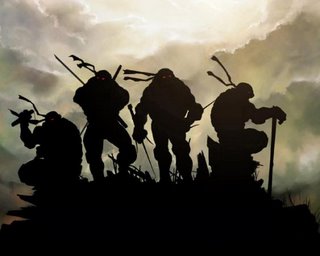 pefully no Keno the pizza boy references though!). It seems the Turtles have grown apart, and must reunite to battle another evil threat. Nope, not Shredder. Apparently, his time in the franchise ended with the pathetic Super Shredder death in Turtles II. Rather, this time the main foe is an evil industrialist named Max Winters who is plotting to take over the world with an army of ancient monsters. That ain't all though! They fearsome foursome will also have to take on a reformed Foot clan, which is under the power of a female ninja named Karai. Apparently Karai is a pretty big character in the newer animated series, but remains unknown to me... At any rate, the Turtles are assisted once again by reporter friend April O'Neil (Sans yellow jumpsuit) and masked vigilante Casey Jones (Their blossoming romance will also carry into this film).
Whew. Well, you can color me interested. While I was hesitant about the film being in CG, the trailer has changed my mind. I really like the appear 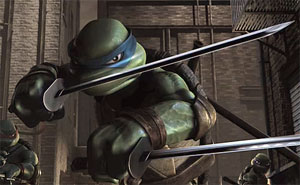 ance of the protagonists as they look closer to the original comics. CG is also ideal due to the fact that it removes the encumbering weight of the suits used in live-action. They can move quickly and fluidly, and truly display their martial arts skills in the way that they should be presented.
I'm also really pleased that Casey Jones is back. Elias Koteas' (pictured) portra 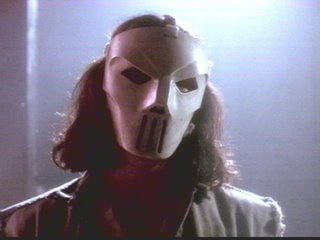 yal of the character in the original film was a major highlight. I was always bitter that his character wasn't in the second film... Stupid Keno... And it was a REAL kick-in-the-face when they brought him back in the third film and only used him as dopey comic relief... Damn, it still angers me... At any rate, I'm giddy as a schoolgirl that he's back, and hopefully kickin' ass.
Now, I'm not overly pleased with the whole monster aspect of the film. I would have preferred something a little less fantastical (...In a movie about four giant turtles...), however the presence of the Foot clan eases this minor negative. Hopefully, the whole monster thing isn't played too much for laughs. We don't need another Tokkah and Rahzar situation, thank you very much.

Regardless, you can count me as one ticket sold. There's few things are entertaining as seeing a childhood favorite brought to the screen... Unless the movie sucks, in which case it's abnormally painful... I have a feeling TMNT may be a keeper though, and will hopefully lead to a bright future of further installments. Maybe then I'll get to see Krang or Slash (pictured) show up... That would be tubular... ____

_______________________________________________________________
Okay, you people know that I can't get enough of Bruce Campbell. I said it just a few entries back! His performances in the Evil Dead trilogy, Bubba Ho-tep, and Xena: Warrior Princess are classics, as are his cameos in the Spiderman films. He also has written some hilarious books: his autobiography If Chins Could Kill: Confessions of a B-Movie Actor, and the riotous fiction novel Make Love The Bruce Campbell Way.
Well, he's back, and ready to reclaim his throne as cult-movie king (Though did he every lose the title?). This time he's directing and starring in a quirky production called My Name Is Bruce, and it has hit written all over it... Well, cult hit that is...
The film centers on Bruce being mistaken for his heroic Ash character from the Evil Dead films, and being recruited to fight a monster in Oregon. The rest is hijinx with a side-o 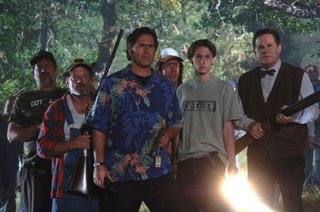 I know I'll be there... Providing it doesn't go straight to DVD that is, in which case I'll rent it... And I urge you all to go out and familiarize yourselves with Campbell's oeuvre. For a full listing of Campbell's finest, check out his website www.brucecampbell.com. In time you too will hail to the king...baby! 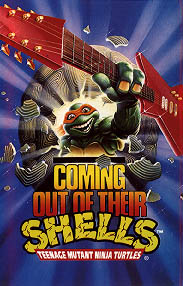 H'okay! This entry is done. I promise it won't be 2 more weeks before I post again. The plan is to get back to my three or four times a week schedule.
Anyways, now that I'm in Ninja Turtle mode, I'm gonna go rock out to their Coming Out Of Their Shells album! Walk Straight is badass!

P.S.: Continue sending questions to camspcepisodes@hotmail.com. I haven't forgotten about it, and I plan on answering one in my next entry! So write monkeys! Write!
Posted by Cam Smith at 3:43 PM

No need to Mutate...