Holy doodle! I never expected to have to do so many Spider-Man 3 posts over such a short amount of time! That said, today was something I really couldn't ignore. At 10pm EST tonight, the new trailer for the third chapter in the amazing/ spectacular/ sensational film series hit the web and American television in a blitzkrieg of promotion. You were going to see this trailer NO MATTER WHAT, DAMMIT! And if you didn't, well, I'm gonna post a link to it and praise it (with a few exceptions) here tonight. I've now watched it a half dozen times and made a few mental notes. Basically just enough material to waste precious moments of your time with. Yee-haw!

After that, I'm going to do a new thing and answer an email question (I wasn't aware I was accepting submissions!) that I received. I'm actually really excited about this and would like this to become an ongoing part of the blog. I'll post an email address at the bottom. But first:

For those of you who somehow avoided it (Sony will probably show up at your door and forcibly make you view it!), here's a link to it: http://www.ifilm.com/video/2783985?loomia_si=1. 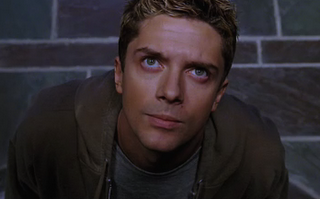 Now, much speculation surrounded the release of this thing. Venom-fever was hitting a disturbingly high rate and people were frothing at the mouths for his appearance in this thing. Well, let the speculation continue because he doesn't show up here. Heck, his alter ego Eddie Brock (Topher Grace - pictured here from the teaser trailer) only shows up in three super-fast snippets. So, while I'm disappointed, I'm now even more excited for the 2nd trailer that will be airing before Ghost Rider starting on Feb. 9th.

Come on people, there's still 5 months till this thing gets released; you really expected them to give EVERYTHING away! I say good on them! Let the suspense build! I'm tired of everything being given away in trailers far ahead of the films release. I can wait to see Venom in action (Though I'll still continue with my obsessive theorizing and posting production photos).

So, now that I've wasted time blithering on about what isn't in the trailer, what is? Well, a whole lotta Sandman! Everyone's gotten so wrapped up in Venom talk that they've forgotten the seriously cool main villain of the film. This clip is the first time we've really seen Sandman in action and it looks awesome. I was concerned it'd be like The Mummy/Mummy Returns type stuff, but now my concerns are laid to rest. Sandman looks like a brutal competitor and the fights between the two look intense. Thomas Haden Church had the potential to be as memorable as Alfred Molina's Doc Ock. I am a bit annoyed by the plot twist revealed though (Spoiler warning!)

We learn in the trailer that it was actually Sandman (aka Flint Marko) who was the REAL culprit behind Peter Parker's Uncle Ben's death. Now, this is nothing short of sacrilege in the comics' community (Go search up a topic on it at a comic book web board. It's ugly!), but I'm going to sidestep that argument. I don't like it because it fee

ls too convoluted. Like, oh, by the way, another super-powered villain is personally connected to Spidey! I mean, can't at least one of these films feature a villain who has no role in Peter Parker's life? Apparently not. This is an addition that just doesn't work for me... It seems like they're trying too hard to give a less fleshed out character a reason for existing. I still am optimistic, however, that the film will deal with the change in a proper manner. Sam Raimi thus far has a flawless track-record and I don't want to doubt him too much.

So, what else do we have going on? Well, we get a little more footage of the alien symbiote suit, and its hold over Peter. I'm positive the next trailer will go more in depth with this, but what we get here is very nifty. I love the voice-overs by Aunt May and Peter that hint at Spider-Man's temptation towards the dark side. I like that they're

showing us the suit's effect on Peter, and the power he feels wearing it. In the voice-over when he mentions the power he feels and how he likes it, it's like a druggie talking about a narcotic high. It's the right tone for the situation and should dovetail wonderfully into the Venom stuff. The shot of Peter tearing the suit off is a powerful image that proves that this film will undoubtedly be the darkest of the series. It may scare the wee-ones...

We also get a little more of Harry Osborn and his anger at Peter for his father, Norman Osborn aka Green Goblin's death. There's not a lot new here, but I'm curious to see how James Franco handles the chore. His character is one of the most tragic in the comic-book series and I hope it translates to the film well. I'll happily forgive the Snowboard Boy suit if the emotion rings true.

On the happier side, the trailer hints that there may be an engagement for Peter and Mary Jane this time around. Since the two characters have been married for almost 20 years in the comics, this is hardly an unexpected event.
From what we see here, Kirsten Dunst seems to have really stepped it up and is showing Mary Jane's mature side. Many felt she was sub-par in Spider-Man 2, but the trailer really gives her character more gravity and authority. Hopefully, she'll be closer to the strong, independent character from the comics. It'll be interesting to see how the love triangle between her, Peter, and Gwen Stacy (Bryce Dallas Howard - only glimpsed once in the trailer) is presented. I hope it's not too soapy.

Okay, and now for something completely different! A letter!

Kim writes: The Big Lebowski [is] a movie that [my husband] thought was really funny, [yet] I couldn't sit through. Any thoughts on that one?"

Hmmm.... This isn't the first time I've heard divided opinions on this one. My friend Gabe swears by the movie. He's seen it umpteen times, and can accurately quote the majority of it. My friend, Mark, on the other hand, thought it was boring. Heck, the critics couldn't even make up their mind on this one. Now, me? Well I love it. But I'll explain myself.

The Big Lebowski is a masterpiece of randomness. The whole movie essentially plays out to the same pace as the lead character's mental state. The plot is all over the place, bizarre characters pop in and out, and there is no real closure at the end of the film. Heck, even the narrator seems to be narrating a whole other movie.

Now, the film's creative team, the Coen Brothers, are definitely an acquired taste... I personally thought Fargo (1995) was brilliant, and quite enjoyed O Brother, Where Art Thou? (2000). Now, with that said, I thought Intolerable Cruelty (2003) was quirky to the point of being tiresome, and 1987's Raising Arizona was almost unwatchable. There isn't really a middle ground with these guys and I'd say your husband and you just happened to fall on opposite sides. There is still

I'd say give Lebowski another chance. Settle down and don't anxiously try to follow it scene for scene. Rather, sit back and just witness the film unfold. It's a film that rewards a relaxed state of mind. Don't try to connect-the-dots or anticipate the mystery plot, as it's simply a clothes-line for the characters to hang from. Enjoy the film for its moments, rather than as a whole picture. It's a comedy of the absurd. The jokes are sly and weird, and aimed at a certain sensibility.

I often fondly think of the bizarre Busby Berkeley-style dance numbers, John Goodman's intense performance, and that great scene where the narrator meets The Dude and the two have an aimless conversation that goes nowhere. Because that's what the film is meant to be, aimless. Plus, take greater notice of Jeff Bridges. His performance is brilliant, as he completely disappears into the character. It's a great comic performance.

Besides, I dare you not to laugh at the final scene where The Dude and Walter toss Donny's ashes out to sea.

I don't know if this is any help. Not all people like the same films. I personally thought Scarface was garbage! I also strongly disliked Jerry Maguire! So, don't feel you're missing out if this one just isn't your style. There will be undoubtedly a film in the future that you will love and he will find pointless. It's the nature of the beast!


Okay folks that does it for me!
If you have questions, feel free to email me at camspcepisodes@hotmail.com! I may even give you some space on the blog like today's letter! A great honor, if I can say so myself!

Wow! Check out the junk mail alert on the swingingest blog ever.