THE SIMPSONS MOVIE: Potential To Be A HOMER-un???

Hey folks! Sorry about the lack of updates! I've been swamped with school work... Okay, actually I've been in a hypnotic state, immersed in the just released James Bond Ultimate Edition DVD sets. But, I knew I had to get away from them. As fascinating as interviews with Maryam D'Abo about her character's motivation in The Living Daylights are, I felt the desire to write! But about what? I could only think Bond. I just didn't think y'all would appreciate my endless crowing about Roger Moore being my favorite Bond! But then, something appeared on the horizon... Something... Yellow!

I received attention that Sunday night would bring with it the world premier of the new Simpsons Movie trailer. It would air immediately after an all-new episode at 8pm. So what did I do? Skipped the whole damn thing and watched the trailer online the next day (http://www.apple.com/trailers/fox/thesimpsonsmovie/trailer/). Cold, huh! But why the hostility? What led me to turn my back on a show that I once declared as the greatest show in history (Perhaps a tad over-enthusiastic...)? Well, old beans, lemme tell you.

It was a dark evening filled with foreboding. It was Sunday, January 5th, 1997 at around 8pm as I distinctly recall (Actually, I just looked it up! Google RULES!). My friend Mark and I were convened at his house to follo 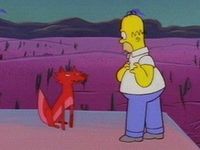 w our near 8-year long ritual of watching The Simpsons when all hell broke loose. The episode was titled El Viaje Misterioso De Nuestro Jomer (Google again...). It started pleasantly enough. We chuckled with great abandon at Homer's antics at a Springfield chili cook-off. Would that Homer ever learn? But then, things got weird. The episode turned into an orgy of bizarre images and a shape-shifting coyote with the voice of Johnny Cash appeared. It was frightening. After the grim conclusion of the episode something had changed. We had changed. Colors seemed dimmer, tastes seemed duller. I know now that a part of our childhood had slipped away. It was my first realization that all is not wonderful and pure in our world. If the Simpsons could fail me, anything could! Mark and I occasionally discuss this episode, in hushed tones, det

ailing everything horrendous about it and how it affected us.

Now, good, even great, episodes followed that ill-fated episode. Sadly, however, there was an inconsistency that hadn't been there before. I watched for a few more years before the show became mired in creative bankruptcy, relying on goofy jokes, stunt-casting and overly-cartoonish situations. The rough "reality" of the series slowly began to dissipate, allowing the show to flirt with the fantastical. It was pathetic. I stopped tuning in regularly, eventually only for a couple episodes per season. I officially gave up on the show after the season premiere last year, where, to dry to her wet hair, Marge stuck her finger in the cigarette lighter of a car to electrocute herself. It was a cheap, Looney Tunes-style gag that left me angry. It was the death of the Simpsons for me... And then they announced The Simpsons Movie!

We got our first glimpse last summer with that mildly amusing teaser featuring Homer in the Superman shirt. It was cute, I suppose, but hardly had me eager to jump back on the wagon. There was also the rough animatic teaser on the X-Men: The Last Stand DVD. Once again, cute, but hardly worthy of the name The Simpsons. Now, we have this new "trailer" that is really only a 3rd teaser.

While I like the whole cheesy CG bunny and dancing flowers bit, that won't be featured in the movie. What will be viewed is the scene of Homer being smashed between a rock and "A Hard Place" (What an inventive joke! Ha...HA...*Cough*...Ah, the hell with it!). That gag is everything that's wrong with the Simpsons now. Now, Homer has always been able to withstand great injury, but there were limits! He could never be smashed, full force, repeatedly, into a boulder with a wrecking ball... And then have said wrecking ball fall on top of him.

I had a glimmer of hope when I saw that they had brought back the series best writers from the earlier seasons to work on the script. The listing is a who's who of great comedy writers: Al Jean, Matt Groening, David Mirkin, James L. Brooks, George Meyer, Mike Reiss, Mike Scully, Jon Vitti and John Swartzwelder, along wit h Matt Selman and Ian Maxtone-Graham. These are all talented guys, but I'm skeptical how much inspiration is left. The plot apparently involves Homer getting fired from the power plant for poisoning the water supply. While not particularly inventive, great things could be done!

But will they? I'm not holding my breath. I'll go see The Simpsons Movie when it opens in July, but I'll be going in with low expectations. I hope, I really do, that Groening and Co. manages to pull a rabbit out of their collective hat and renew my faith in the once beloved show. I would love to see the franchise taken back to its earlier brilliance. Only time will tell, and I can only base my thoughts on the three teasers which have left me neither shaken nor stirred (Had to end on a Bond line, sorry!)
_____

Years back, rumors were circulating that Tarantino was putting together a Pulp Fiction/Reservoir Dogs prequel called The Vega Brothers. The plot was designed to explore the backgrounds of Vic Vega (Madsen - Reservoir Dogs) & Vincent Vega (Travolta - Pulp Fiction) and how they ended up where they did (Dead, I assume). There's a story today at one of my most often referenced sites Rotten Tomatoes (http://www.rottentomatoes.com/news/comments/?entryid=379518) regarding the possibility that this film may one day happen.

How, you ask? Well, there is an "ingenious" way to get around the two actors advancing ages! I'll let you read it in the article. I'm not sold that it's "ingenious", though. But then, in Tarantino's hands, who knows. Either way, I just want to see Madsen back on the big screen. While I won't hold my breath for The Vega Brothers, I am desperate for Tarantino to get his WWII movie Inglorious Bastards going! Apparently Madsen would have played a big role, so I'd get my Madsen fix along with my WWII movie fix! Heaven, I tells ya! I just hope Flags Of Our Fathers' failure at the box-office doesn't put the kibosh on future war movies... Cuz this is one I've been waiting for for a loooooooong time. In the mean time, we'll have Madsen's return in Sin City 2 to look forward to, as well as Tarantino's half of Grind House in April.


Well that's all folks! I never thought I'd make a reference to Free Willy on this blog... Especially a highly complimentary one. Though it actually is a really good movie.

The posting frequency may be a bit slow in the next bit as my school work is about to collapse on top of me. I do promise to have a review of Casino Royale up lickety-split! And you can be sure that if any more Venom stuff comes out... BAM! So, I'm back to my Bond DVD's. Take care peeps!

Hold me, like the river Jordan,
and I will then say to thee,
"You are my friend..."