Sentinel Of The Skyways To Make FANTASTIC First Cinematic Appearance!

Hey guys! Hope you're having a good beginning to your weekend. My initial plan with this blog was to do pieces on Fridays highlighting the new films entering theatres that day. Last week, I kinda did that with my Texas Chainsaw/ Departed thing. This week my choices were between The Grudge 2 (Which I said all I could about yesterday in my angry rant about insipid horror movies) and Man Of The Year, which features Robin Williams... Anyone who knows me well knows there are few things more irritating to me than a manic Robin Williams comedy. Drama, he's fine. But the majority of his comedy showcases (Mrs. Doubtfire notwithstanding) are icepick-through-the-eardrum awful. So, since I had nothing much to work with (Though I could bitch about Williams for 1000 words....), I'm instead gonna do a piece on a movie few of you are excited about and a character fewer still are familiar with.

I wanted to talk a little today about an icon of my childhood who will be coming to theatres next year in the sequel to the widely disliked Fantastic Four movie. The Silver Surfer (Pictured above) was a defining figure for me at the impressionable young age of 12, and I will be eagerly anticipating his arrival next summer.

But first, some background. Let's take a time machine back to the glorious year of 1992. Hurricane Andrew left 250,000 Florida residents homeless, young Amy Fisher pled guilty to attempted murder, allowing Joey Buttafuoco to run free, the Rodney King beating occured, which led to the controversial trial results that began the L.A. riots, and Woody Allen and Mia Farrow were engaged in a bitter court battle over Soon-Yi... Hmmm... Maybe it wasn't so great... Well, on the brighter side Wayne's World (my comedy bible) was released, The Cold War was declared over, rascally Bill Clinton won the presidency from reptilian Ross Perot, Johnny Carson gracefully retired from the late night game, and a young upstart named Paulie Shore stole our hearts in Encino Man ("The Weasel!!!"). At any rate, it was also the year that I discovered comic books (a discovery I'm sure my sister wishes hadn't occured...).

My good friend Dave and I became consumed with superhero comics that year, specifically those published by mighty imprint Marvel Comics. The two of us used to spend our weekends biking to the local corner store or drug store snatching up a couple comics for about $1.25 each (Oh, how old I sound, and how inflation has risen...). Dave had a quick affinity for Spider-Man (How could you not!), and set his sights on collecting as many adventures of the Webbed Avenger as possible. I found myself drawn to the hypnotic image of the Silver Surfer. Something about that shining figure against the blackness of space captured my imagination, and I was sold. From then on, Silver Surfer was my number one. As our collecting got more fanatical we'd get rides over to the local comic stores Airship Comics and The Comic Scene in search of cheap back issues. It's a memory I look back on fondly and the reason I feel personally invested in the upcoming film.

Silver Surfer's origin is a tad bizarre to those unfamiliar with comic-book lore. Silver Surfer began as Norrin Radd, native of the planet Zenn-La. He was in love with the lovely Shalla-Bal and living a peaceful existence... UNTIL (There's always an "until") a powerful being called Galactus came around. See, Galactus survives by "eating" planets, and ol' Zenn-La was lookin' mighty tasty. To save his planet Norrin agreed to become Galactus' herald, thus being transformed into the Surfer (And never to be with his beloved again!). The Surfer's job was to find less inhabited planets for Galactus to consume. Anyways, to make a long story short, Surfer came around Earth and was going to tell Galactus to chow down before the Fantastic Four changed his mind and he turned against his master. Despite fighting off the hungry dude and saving Earth, Surfer was stripped of his status and left to soar the skyways alone, in search of answers.

The above story is what we'll be seeing next July when Fantastic Four: Rise Of The Silver Surfer is released. Now, many, many people disliked the original Fantastic Four. I was not one of them, but I understand their reasons. Many felt that, after the X-Men films, Spider-Man films and Batman films, Fantastic Four was too lightweight and fluffy. I hear y'all. Thing is, this is what I liked about the movie. It was bouncy, goofy, and just an all-around fun 100 mins. I thought the actors did a good job recreating the characters (Especially Michael Chiklis & Chris Evans). It was an enjoyable film, but by no means a classic. I'm afraid, however, that while the light-hearted approach worked out okay the first time around, it just won't cut the mustard when it comes to my buddy, the Surfer.

The Surfer is a tragic character, forced to give up everything he loves and holds dear. He isn't a snappy one-liner kinda guy. He's prone to long philosophical soliloquies pondering our and his existence. He's far more likely to have an intelligent conversation than kick ass. Sure, when he does go loco it's awesome, but it's also rare. Looking at the first FF film, I'm not 100% convinced these films are the perfect launching pad for his inevitable self-starring franchise. Director Tim Story better brush up on his filmmaking techniques and examine what makes a script work. His past efforts show a severe lack of judgment (Taxi, anyone?). The Surfer deserves to make it onto the screen with his dignity intact and not altered to fit the short attention-spans of rowdy 16-year old boys.

While I'm concerned about Mr. Story's input, I'm really excited about the special effects department's efforts. It was announced early on that Surfer will be created through CG. Okay... That could be neat... Then it was announced that WETA (The geniuses behind the Lord Of The Rings films & King Kong) would be bringing him to life. Well damn, if he looks half as good as Gollum or Kong, I'll be giddy as a school 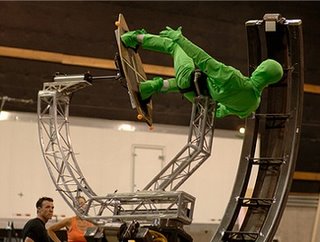 girl. They also hired Mr. Doug Jones to do the movements for the Surfer. No newbie to the process, he also did the body work for Abe Sapien in the under-rated Hellboy. As you can see in the pic, Mr. Jones (clad in the green pajamas) will be acting out the majority of what ends up on-screen, with the pajamas covered in the Surfer's reflective silver skin. I'm very curious who they'll find to do the voice. It has to be someone with a certain Zen-ness goin' on. Like a smarter Keanu Reeves-type voice.

Well Mr. Story, I'm intrigued. You've taken a project that had little anticipation and made it something to get excited over. You may not prove to be much of a filmmaker, but you have a potentially great future in spin-control. That is, if you end up dropping the ball on this one. Well, I don't really have a B-story for today. It ain't a particularly scintillating news day in pop-culture. I would, however, like to wish Roger Ebert, another huge childhood idol of mine, continued success on a tough battle back from illness. You can read his latest update on his condition at his home page at www.rogerebert.com. It hasn't been a fun summer for Mr. Ebert and I just wanted to give him a quick shout out. I've missed his brilliantly written reviews every Friday, and he's much missed on the balcony with Roeper. So, my respects go out to Ebert and his family and it's my regret (And his benefit) that I won't be able to hear him rip The Grudge 2 to shreds. Ah well, there's still his review of Hostel 2 to look forward to in the future. Give 'em hell Ebert!


See, these posts can have real heart attached! You got a fond recollection of my childhood, and a solemn well-wishing to an early idol. There's a whole plethora of emotions swirling around The Latest Episodes In Our Crazy Pop-Culture World (Really need to do something about that title...)! Well, hopefully next week I'll get back on track with my Friday new release format. Heck, next week brings Clint Eastwood Flags Of Our Fathers! Now, that's something to get excited about! Until next time, in the words of Ebert's fellow Chicago-ite, take care of yourselves... and each other.

So does everybody else!

Our performance for updating with new on-line casinos isn't currently in place. This record will be accurate within a couple of of} months and then often updated with the latest casinos in New Jersey as quickly as they launch. This is a listing of the latest casino bonuses in New Jersey. The 토토사이트 record is ranked based mostly on launch date where the latest casino is first. For detailed rationalization of wagering requirements, see PointsBet full evaluation.