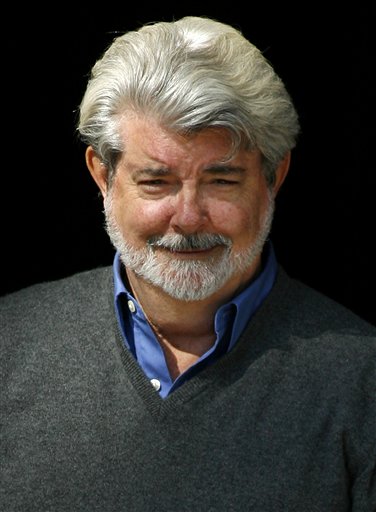 Hardly. But word on the street is that trouble's a-brewin' down at old Skywalker Ranch...

Basically the whole story boils down to this: George "Greedo Shot First!!!" Lucas is taking a few years off film to focus on TV. He is retiring from the Blockbuster game, but not from film in general. I say good for him. Geez, I figure making three Star Wars films in 9 years would be enough to send most directors running to Indie-film land (Though, the last three Star Wars films were technically independent... But you get my drift.), so why should George be any different?

I am, however, a little hesitant about this live-action Star Wars TV series he's got underway. Now, anyone that knows me knows I am a Star Wars geek (I have autographed photos of both Boba Fett AND Greedo... My family is very concerned...). It should also be noted that I loved the prequel trilogy (Minus "Wizard!", "Hold me like you did at the lake on Naboo", and Anakin's creepy "Sand isn't smooth like you" speech). So, if anyone should be excited for this it should be me, but I'm concerned.

Why? Well, for a few reasons. First, Star Wars is just too big to be shrunken down to a TV screen with a TV budget. I'm picturing Andromeda and Stargate SG-1 effects and that just won't do. Lucas has also stated that the series won't include any of the main characters from the films. Great, like that crappy Droids cartoon from the 80's, or the Ewok TV movies? I also don't want any more alterations to the continuity. I still have trouble accepting that Yoda and Chewbaaca were buddies long before Luke ever travelled to Dagobah... Or that Darth Vader made C-3P0... I'm of the stubborn (and useless!) opinion that the series starts and ends with the Skywalker clan. Let's leave it at that.

Now I sound all bitter and whiney. I better focus on the positive before I lapse into a profanity-fueled rant about the Special Editions and that recent DVD re-release. I'll tell you what I'm optimistic about! I'm really eager to see George's future film projects. People often forget that George made his name with American Graffiti (Kids, go rent it!), and I think it's time he went back and re-visited small character-driven films. I'm also intrigued by his long-planned Tuskegee Airmen project. In short, I want Lucas to remind people that he can be a great director of something other than space operas. Oh, and while I'm giving unwarranted advice: C'mon George, lets get Indy 4 out before Harrison Ford is confined to a nursing home.

Now is truly a great time to be a comic-book fan! They're cranking out films featuring every character to ever grace the page these days! The future will brings us new film adventures starring not only everyone from the A-list (Spider-Man, Hulk, Batman, Wolverine, Fantastic Four, Superman and Captain America) to B-list players like Ant-Man, Shang-Chi, Punisher, Nick Fury, Namor, Magneto and Iron Man (It's becoming a really sad, but gratifying, game to see in how many of these entries I can name-drop Iron Man). February is bringing another one to the multiplex and that would be Ghost Rider. The newest trailer has hit the web and you can check it out below:

What can I say, I'm sold. But then, I actually paid money to see Elektra so what do I know?

While I'm plugging trailers, this one's definitely worth a look. This was a project that wasn't on my radar at all but it's looking promising. Based on the graphic novel by Frank Miller (Sin City, Dark Knight Returns), 300 is "a ferocious retelling of the ancient Battle of Thermopylae in which King Leonidas (Gerard Butler) and 300 Spartans fought to the death against Xerxes and his massive Persian army". Actually, that's according to publicity materials (Yes, I actually do some sort of research on this half-assed effort!). All I know is that the visuals are unreal and will be amazing on the big screen. You can see what I'm talking about below:


Well, that's it for me folks. 3 major entries and counting and still no quoting Army of Darkness... Who'd a thunk?

P.S.: Props to my best friend Mark for coming up with the title of this entry. I'm sure George Lucas would thank you too.
Posted by Cam Smith at 10:32 PM

Any rumors on what actors will be on the Star Wars series?